from THE SYSTEM OF ANTICHRIST / Bereshith by Secret Chiefs 3 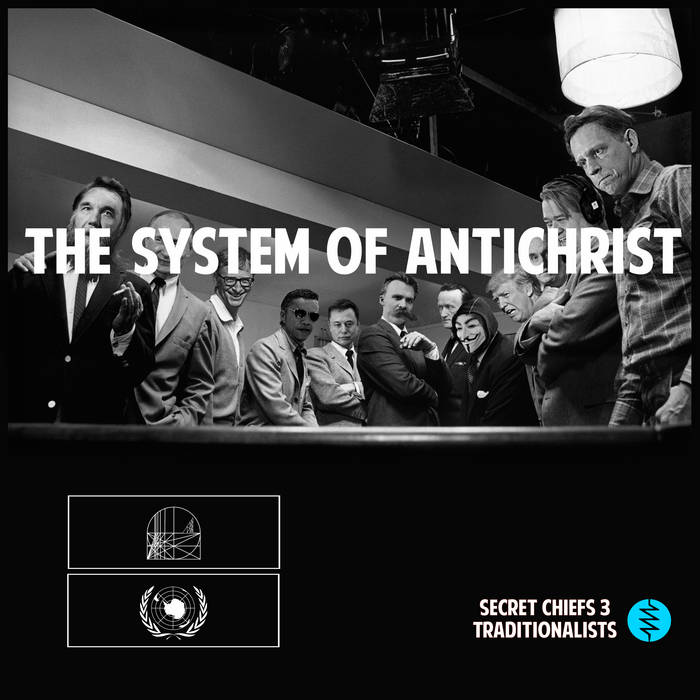 SC3: Traditionalists takes it to the musical realm of giants: Mancini, Bernstein and the like. And for a good reason...

There's a petrol-casino at the top of the world, and in it there's a great roulette wheel spinning widdershins. Insider games of quantity for the big-scale molecule shufflers, the House deals out fates to a world blinded by the Orient/Occident mirage and the

The stakes are high and the big winners are crowned le «Roi du Monde» by their amateur Cakravartin... one after the other... but everyone knows the House always wins in

The SYSTEM of ANTICHRIST.

In it is strength. He shall establish.

The SYSTEM of ANTICHRIST.

Not being entranced by Cartesian dualism, the ancient Egyptians situated the top of the world at the South Pole. The Manichaeans on the other hand, saw the southerly direction as blatantly "evil". But in the equatorial realms it would make better sense to orient towards the rising sun, towards the eternally unfolding scroll of the world. This would put the rotating Casino of the North on the "Left Hand" where it probably belongs. But the quantitatively-inclined ought not be too surprised when the cardinal points themselves seem to twist to suit the widdershins counter-initiaton of


With sleight-of-hand transvaluations, the advent of Big History, and a techno soundtrack of Nordic pseudo-FRAVAŠI, the sound-and-light spectacle of false hope reaches its apex and seduces all into

Not long ago there was a sacred call that went something like "penetration of the mundane by the marvelous" to which a few bold luminaries responded. Today with the impotence of all arts under Capitalism, Communism, Socialism, Anarchism, Fascism, Egalitarianism and Pragmatism, the artist-manque propped up by these regimes can barely manage a lukewarm attempt to "penetrate the marvelous with the mundane". On the contrary, he/she quite enthusiastically trumpets grey anthems to the glory of the very same

All dolled up with nowhere else to go but the transhuman experiment in immortality... says a literal Vampire. We'll see what the God of Quantity has to say about that. But the back-spinning clocks herald a new kind of morning, and a new kind of daylight, from the same deadly sun. So, Dr. Youngblood, what kind of coffin can shield us from the sun rising in the occident? Make quick work of the Great Work. Mephistopheles suggests you get it done before they switch on the machine in the full-scale implementation of

from THE SYSTEM OF ANTICHRIST / Bereshith, released March 21, 2017
Composed, arranged and produced by Trey Spruance.

Alex Rita and Errol from Touching Bass feature in our special London edition of the Bandcamp Weekly.