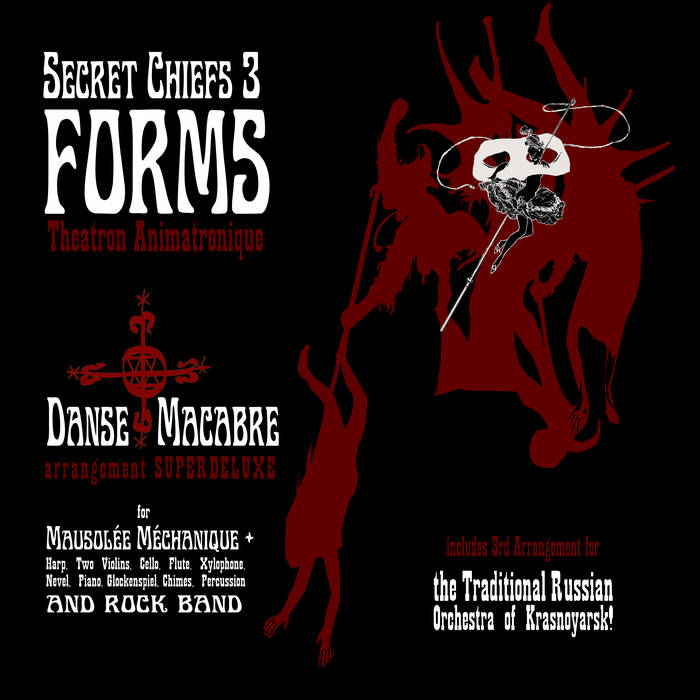 Some will have heard our initial 2012 arrangement of Danse Macabre, the one we played at hundreds of SC3 shows and on the [sold out] 2013 "Apocryphon of Jupiter/Danse Macabre 7-inch record (which represented the limit of what we can pull off as a 5-piece live band, and of which there is no digital version).

Since then there have been three increasingly elaborate arrangements, hybridizing SC3 with other, larger ensembles. The mother of all these arrangements in scale and depth is the FOURTH ARRANGEMENT "Superdeluxe" (2017) on offer right here. It's a complex weave of obsessively rendered elements built upon the foundation of our own first arrangement, but now incorporating the genius work of many other voices who have contributed to the entire history of this piece,. For example, harmonic inventions from Franz Liszt's solo piano version of Danse Macabre copiously pepper this arrangement, and his ideas can now be heard redistributed among the various instruments of a hugely expanded FORMS Mausolée Méchanique (which is all %100 human playing, irony intended). New contextual inspirations from some orchestrion roller organs of yore, and sonic settings from certain renderings on Mighty Wurlitzer also now find their way deeply into the maze. Read all about it in the liner notes. This arrangement also weaves elements from Liszt's "Totendanz" into the tapestry, a stunt that would require some explanation if we were to digress (and we will later on). Elements from our other previous arrangements are also present, noting especially performances from the SECOND ARRANGEMENT, which we did for the New Music Works Ensemble, conducted by Philip Collins. The "Superdeluxe" arrangement is a very comprehensive presentation that took some doing. Find a $7 coin to drop in the slot and hear for yourself -- behold the thundering sound of the Mausolée Méchanique!