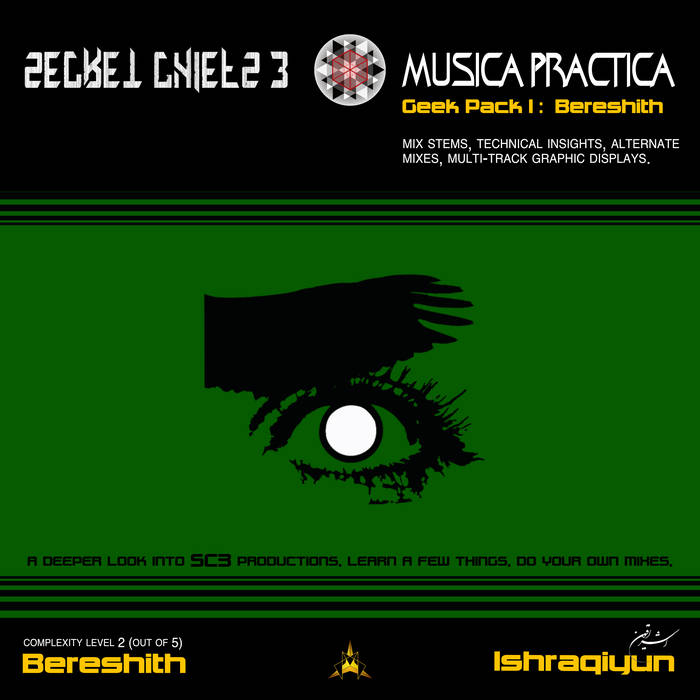 Rich Blankets Do I enjoy this? Does a bereshith in the woods? Favorite track: ALT MIX (Bereshith) - "Hagia Sophistry".

mwpsychonaut This pack is so cool!!! Trey Spruance, is the most passionate, diligent, hardest working DIY artists around. Truly a generously rare treat you've shared with us! Trey, you are appreciated!!! Thank you

Martin Aagaard Jensen What Trey is achieving with giving fans deep insights both technically and musically is without comparison. This effort to share the love of music, and spread his thoughts and inner self is gracious beyond words.

Rocket Worm User-made mixes of this material can be submitted to sc3geekpack.blogspot.com

Zamy Boy This is such an awesome idea! Even though I personally have no plans of doing any remixes, I really feel that this geek pack deserves to exist for those who want to do so!

Warm greetings to the curious listener, Trey Spruance writing here.
Thanks for all the positive feedback for this idea! Here we are with the first Geek Pack, thanks to you!

First off, for those who are curious about this (but not THAT curious!) I've enabled public listening on a couple alternate mixes of "Bereshith". Listen a little deeper into various aspects of the piece without purchasing all the stems. Voilá!

For those wishing to go deeper:

Welcome to (and thank you for purchasing!) the first SC3 Geek Pack. My intention here is to open a window on some of the musical subleties that lie buried in the dense fog of SC3 mixes. I also want to give creative types some hands-on freedom to explore the mixing process in-depth. Moreover, I intend that the Geek Packs would shed light on some of the many proprietary •techniques• involved in creating a final Secret Chiefs 3 recording. This won't be so much a "basic recording and mixing 101" as a big window opening onto the over-arching •process• by which things finally come together (a different process for each song, and radically so for each satellite band). More than just offering stems, which are all at zero-point and you are free to load into your DAW and mix at leisure, I aim to satisfy the curious with a few descriptions and illustrations of how things came to sound the way they do. Although a full instruction in EVERY DETAIL ALL AT ONCE would take an impossible amount of work to put together, and be a pain in the ass for anyone to sit and "study", I think the following scenario will be pretty workable. Provided there is continuing interest, we'll build up a library of songs in stems that a) are fun and interesting by themselves, b) illustrate some key production techniques one step at a time, c) open up the many performances to your deeper scrutiny and appreciation, and d) give the creative modifiers & remix jockeys out there something to play with.

As an example I made five alternate mixes restricting myself to certain small numbers of elements. This was just to give some idea of how many ways all these elements can be combined musically, just by moving them around. Follow your imagination!

In a way this is an idea that's been a long time coming, and with the advent of bandcamp we have a platform to start chipping away at it!

In addition to sheets that describe each stem, which include a graphic capture of the relevant audio tracks and the automation items that were involved in each of them, I have also included 1) a comprehensive "TRACKS WINDOW", 2) a "STUDIOS AND CHRONOLOGY" page that details who did what, and where, 3) a description and graphic illustration of one of the more left field processes involved in the “MULTI-SESSION RECONCILIATION EXAMPLE”, and 4) little pointers to details like group edits done to adjust "feel", and mic-bleed happening between performers.

It may not come across this way but “Bereshith” is one of the simpler productions in the SC3 oeuvre.* It’s a good place to start with the Geek Packs, since there are a few introductory-level examples of processes (like the one described in the MULTI-SESSION RECONCILIATION EXAMPLE) that can get so huge and cumbersome in other songs that describing them just like that, without a primer, would be a bit psychologically overwhelming for everyone involved. But in this dose it should be approachable.


This first foray is by no means a perfected format, and I'll appreciate hearing your comments and requests on how to improve future Geek Packs!

The pricing, like the Geek Pack itself, is intended as an approachable compromise between general interest items, instructional materials and sample-sourceable mix tools.


Finally, we (SC3 and WoM) authorize people to use these stems in any capacity for their own non-commercial amusement. Feel free to appraise us of your creative work with them! We do not authorize re-distribution of the stems or their texts in any medium. Use of the stems for educational purposes is authorized, but any reduplication of the materials needs to be authorized by Web of Mimicry. Any commercial application of any of the the recordings needs to be authorized by a licensing agreement from Web of Mimicry. Feel free to contact us here or at wom@webofmimicry.com


We focus here in the Geek Packs on Musica Practica. What I mean by the term is simply the elements drawn together in order to render ideas as tangible music, lived experiences for the ears. We focus here on the practical side, the "whats" and "hows"; whereas Musica Theoria would be the "whys" and "whens" of music theory, motion, number and time; and Musica Speculativa the "wheres" and "whos" of metaphysics and poetics. This threefold way of looking at things is fundamental to the structure of SC3's grand ouvre, as a glance at the cover and back cover of Ishraqiyun's "Perichoresis" might confirm. When acting as the focal point, as it is here, Musica Practica draws together the most immediately apparent aspects of the music; the pre-existing musicianship and SC3-specific pedagogy required of the instrumentalists who play in both/either recording or live SC3 configurations, the part-writing, the rehearsing, performing, recording, as well as the producing and mixing. Taking all of these elements into account, by far the majority of time spent on a SC3 song is spent on mix construction. It's natural that the Geek Packs, relating (almost) solely to SC3 practical concerns, would emphasize production elements.